In my magazines and cookbooks, I finally started noting how we liked each recipe. My mom always did this, so I don't know why I didn't start it sooner.

The meal we made Thursday got an "excellent." It was fantastic--and easy, too. The recipe, Korean-style Beef Skewers with Rice Noodles--was another recipe from the May 2010 Cooking Light. For a quite a while, not too long ago, I really wasn't eating red meat (for no good reason, really). I still don't eat a ton of it, but the grass-fed, free range beef we've been buying from Outpost or farmers markets is just so good. It's so much more flavorful and lean than typical grocery store beef.

The recipe for the beef and noodles is above. The only thing we did differently was use Sriracha instead of chile paste. We cooked the beef a little longer than it probably should have been cooked (we had a bit of a grill snafu--the gas tank ran out on our big grill, so we had to use our small tailgate grill, which makes it a little harder to control the heat), but it was still really tasty and flavorful. 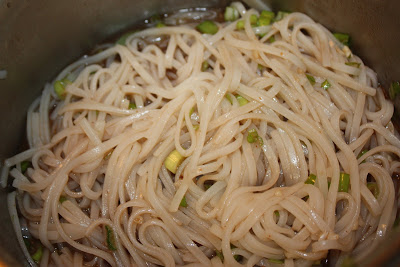 On the side, since we had some to use up, we made a spicy eggplant dish. Here's the recipe. Since we really only had about a half an eggplant--rather than the four Japanese eggplants the recipe calls for--I kind of quartered the recipe and made it up a bit as I went. I used all the ingredients the recipe calls for, other than oyster sauce (I used the fish sauce we have) and chili garlic sauce (again, I used Sriracha). 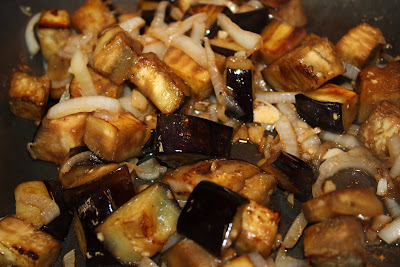 The eggplant was really tasty. It was definitely a new and different way of making eggplant. 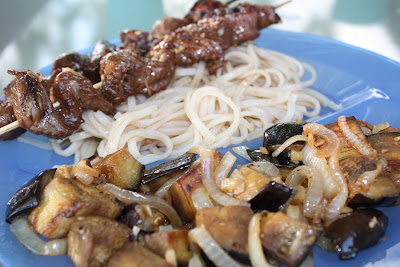