This week, all the recipes we made came from the May 2010 Cooking Light. This one, however, wasn't an actual Cooking Light recipe, but rather from one of those ads in the middle of all the recipes. The ad was for al fresco chicken sausages. Funny enough, we didn't actually use the al fresco chipotle chorizo mango sausage the meal calls for, because Outpost doesn't carry them. So we substituted Outpost's chicken andouille sausage. It was the closest they had.
Here is the recipe for tomato, avocado and black bean salad with skewered grilled chipotle chorizo mango sausage. And here's what we did differently:
-Sausage substitute, as stated above.
-Instead of cutting the sausage before grilling, we grilled them whole and then cut them into pieces.
-I used an entire can of black beans, which, if I remember correctly, was just under 1 cup.
-I couldn't find fresh mango (must not be mango season), so I used a can of mango chunks, drained. 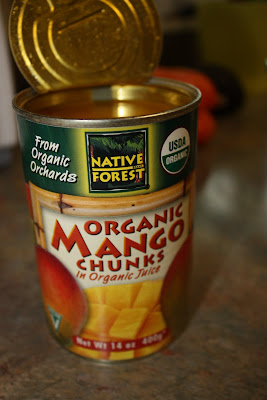 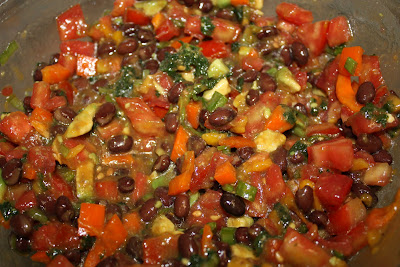 -Since we don't have white balsamic vinegar, I just used regular.
The meal was very good. The sausages from Outpost a great. They have a nice spice. We served the meal with slices of a sourdough baguette. Unfortunately, by the time we cut it up it was really dry. I think next time I'd just have it with a few tortilla chips. 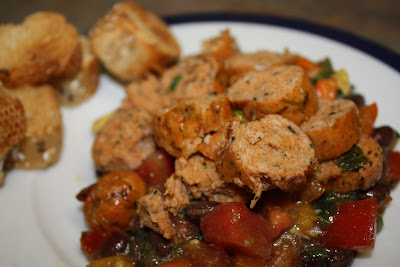