There are many things I love about Colorado -- the mountains, the craft breweries, the skiing and hiking, the laid-back lifestyle -- but one of the things I love most is that you can order delicious, homemade green chile chili just about everywhere you go.

Whenever we're in Colorado -- and we're there a fair amount, with Nate being from Colorado and having plenty of family members there -- I'm always sure to order a cup or a bowl. The style I've had in Colorado always has pork in it and is very thick. It's often served over other foods, such as burritos. Yum!

Green chile chili is always something I've wanted to make and for some reason never did. Until now. 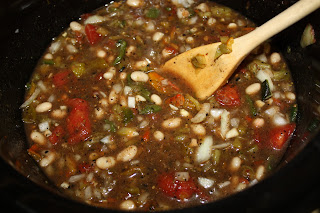 With the cool fall temps and changing leaves, I figured now would be a good time to make our first batch of chili of the season. Nate and I both consulted a few different green chile chili recipes for ideas and insight, and then came up with this recipe. 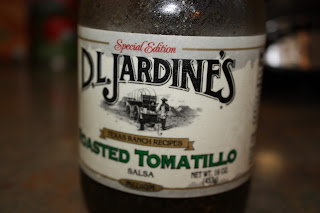 I have no idea how traditional it might be (I have a feeling it's not too traditional at all), but I can tell you this -- it was delicious, and we will definitely be making it again. It had just the right amount of heat for us (it might be a bit much for those who don't like things too spicy) and the pork and Great Northern beans made it very satisfying.

Green Chile Chili
Cut pork in about 1/2-inch to 1-inch pieces (you can cut it after cooking, too, which is sometimes easier). Dredge pork in flour. Heat olive oil -- about a tablespoon -- in a large skillet over medium-high heat. Cook pork until browned.

Meanwhile, turn oven broiler on high. Place peppers on a foil-lined baking sheet. broil peppers and chiles, other than the small red ones, until blackened, rotating as needed (I think this took me about 20 minutes total). The small red  ones were too small to broil, and ended up crispy. I would just chop those and throw them in with everything else. After the peppers are blackened, place in a plastic bag and seal for about 15 minutes. Peel skin off the peppers, de-seed if desired and chop. 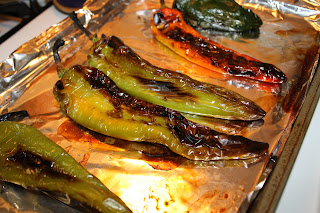 Add pork, peppers and rest of ingredients to a slowcooker. Cook all day on low (you could also do this on the stovetop for a few hours, but I like how flavorful soups/chilis get in the slowcooker). Serve with cornbread, shredded cheddar, tortilla chips or anything else you'd like. 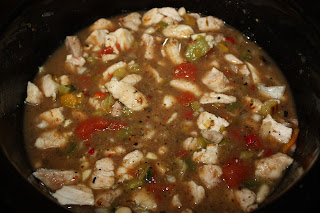 I was so excited to eat this meal that I didn't take a picture of the finished product. But I'm sure you can imagine what it looked like!

This recipe comes from the Cooking With Beer recipe booklet my parents gave Nate a while ago. The recipe -- Pork Chops With Lager-Infused BBQ Sauce -- obviously calls for pork chops, but we had some boneless, skinless chicken thighs we used instead.

The recipe calls for a marinade and then a BBQ sauce to have on the side. Everything was tasty, and I'd definitely make it again. We (well, really, Nate ...) added a little too much beer to the sauce, it was a little more liquidy than it probably should have been. So stick to the measurements! 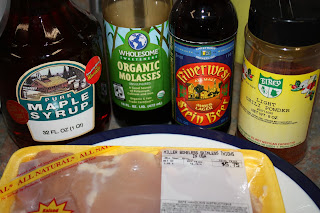 The recipe also calls for you to grill the chicken, which we did, but you could bake it in the oven just as easily.

For the chicken marinade:
Combine all ingredients besides salt and pepper in a resealable storage bag. Refrigerate 2 hours, turning occasionally. 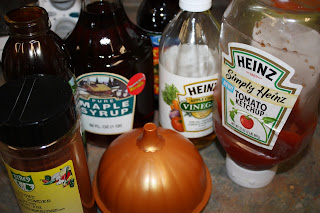 Prepare grill for direct cooking. Remove chicken from marinade and discard marinade. Sprinkle chicken with salt and pepper. Grill over medium-high heat about 7 minutes per side or until cooked through. Serve with BBQ sauce.

For the BBQ sauce: 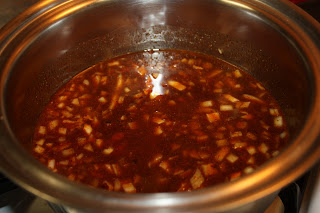 Combine all ingredients in a small saucepan over medium heat. Simmer 10-12 minutes or until slightly thickened, stirring occasionally. 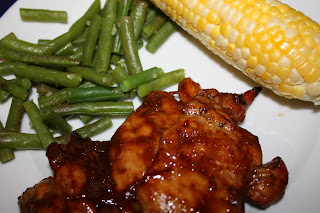 Email ThisBlogThis!Share to TwitterShare to FacebookShare to Pinterest
Labels: Easy, From Scratch, Grilled

I've wanted to make lettuce wraps for a long time. I always enjoy them when I order them as an appetizer, and they seem easy and healthy. When I saw a recipe for Chicken Lettuce Wraps in the September 2011 Cooking Light -- even though they're Italian-flavored, rather than the typical Asian-flavored -- I thought I'd give it a try. 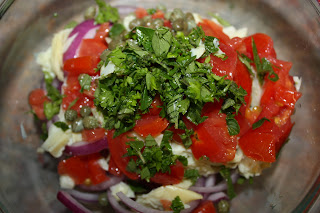 I made a few adjustments, based on what we had and what I could find: 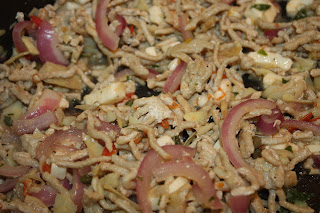 Unfortunately, this dish didn't turn out well at all (which, if I would have read the comments on the recipe, I would have discovered others didn't care for it either). It really didn't have much flavor, and surprisingly, the lettuce flavor was really overpowering. I think some of it had to do with the fact that the chicken I used -- while it was safe in the freezer -- was fairly old and dry. 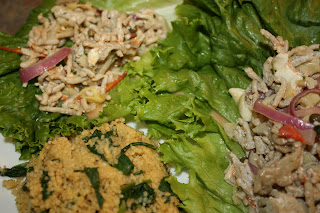 I'd love to try making lettuce wraps again, but I think I'll go for the more traditional Asian-flavored ones. Anyone have a good recipe?
Posted by Nicole at 9/21/2011 08:26:00 PM No comments:

Upon receiving the September 2011 issue of Cooking Light, I just knew I had to make the cover recipe: Creamy, Light Mac and Cheese (oh, how I love mac and cheese!). 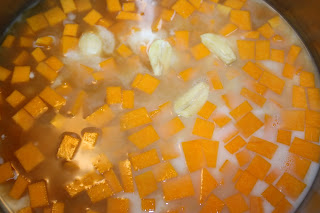 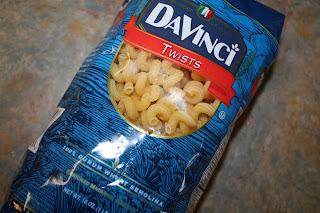 I really love two things about this recipe: it uses cheese I might not normally use and think of for mac and cheese, and it incorporates butternut squash, which I LOVE.


I followed the recipe very closely, except for a couple of things: 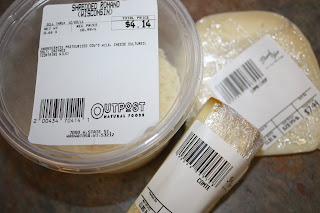 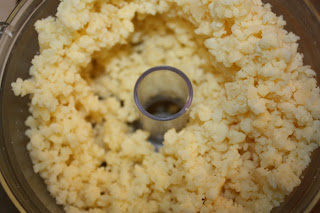 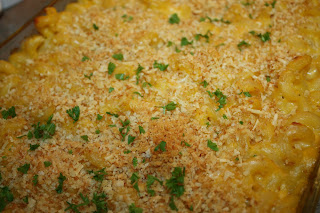 After reading through some comments people left at the bottom of the recipe page, I might take some advice and eat the mac and cheese without baking it. I think it would be even creamier this way. 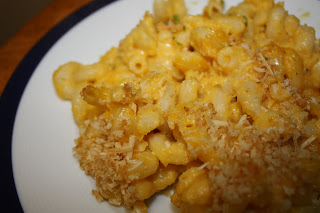 Restaurant Review: The Eatery on Farwell

A few months ago, the #mkefoodies group held at tweetup at The Eatery on Farwell. Nate and I, of course, were in attendance, and we happened to win a $25 gift certificate in the raffle. Score! We finally used it just a few weekends ago. During the tweetup, we sampled tons of food, and all of it was really tasty. So we were definitely looking forward to our meals.


Neither of us were super hungry, so we didn't start out with any appetizers, but our waiter brought out some tasty fresh-baked bread and butter for us to snack on. With that, we ordered some beers. We both tried a unique brew--The Eatery Brew, which is a sampling/combination of whichever six taps the restaurant has at the time. Maybe surprisingly, it was really tasty! We should try it at home sometime ... 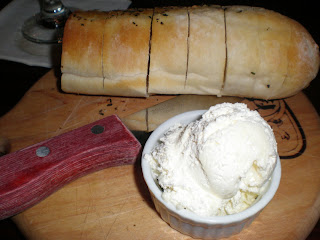 The Eatery's menu is super extensive, so it took us a while to decide. For meals, Nate had one of the night's specials: steak with a creamy peppercorn sauce, alongside peapods and mashed potatoes. It was all very tasty, and a perfect amount of food. 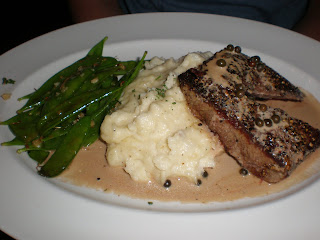 I ordered an unusual-sounding dish: pig in a pot. Turns out, as odd as the name might be, it was delicious! Inside an actual terra cotta pot--with a flower on top!--was pork tenderloin with mushrooms, sauce and muenster cheese. I had the same vegetables--pea pods--on the side as well as root veggie mashed which was especially delicious and something I can't wait to try to make at home. Even though Nate had the perfect amount of food, my meal came with a ton of food, so I had some to take home, which was great. 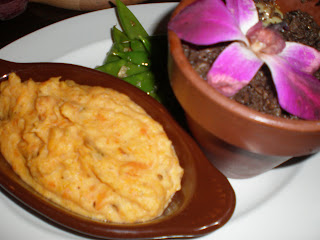