After an event last Friday night, my FUEL Milwaukee team went to dinner at Botanas. I haven't been to Botanas all that much, and not as much as some other southside restaurants (like Conejitos and La Fuente).


There were originally eight of us (there ended up only being seven when it was all said and done) and they told us it would be about a 25 minute wait and they couldn't guarantee we would be at the same table. Well, within 10 minutes they sat all seven of us at a table.

We started with the usual chips and salsa. The salsa was pretty good--it had a bit of spice and was flavorful. We didn't order any appetizers--we had been snacking on some stuff at the event we had been at, so I don't think any of us were starving.


I definitely didn't want to have any typical Mexican-restaurant type food that I've had before, and I knew I wanted to try something new. So on the house specialities page, I decided to try the chile en nogada--a poblano pepper stuffed with ground sirloin, nuts and raisins, covered with a chilled, creamy pecan sauce. It was served a choice of tortillas to make tacos, I guess you could call it. It also came with rice and beans, along with a small pile of lettuce, tomatoes and some cheese. It was really good--unlike anything I had ever had before. The flavors were great, even though they sound like they wouldn't go together. You almost don't even need the tortillas--it'd be good to have on its own. 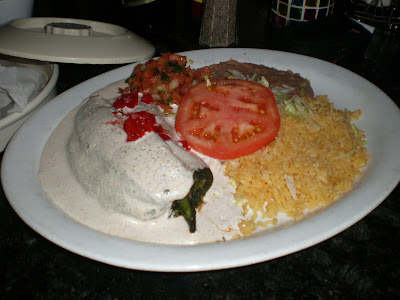 Nate ordered the Oaxaca tamales--pork and corn dough wrapped in banana leaves. They were supposed to be spicy, but they really weren't. The taste was really good, though. I'm not sure what affect the banana leaves are supposed to have on the tamales, rather than the more typical (at least it seems that way) corn husks. In any event, they were good! His meal also came with beans and rice. 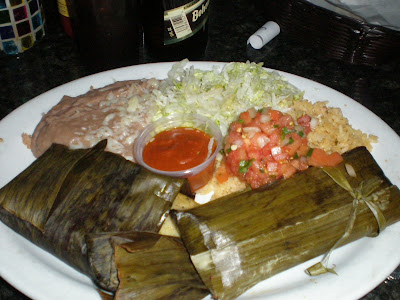 Also, the service was good. Our server was really friendly and present without being at our table all the time. I'm not a huge fan of the big, southside Mexican restaurants, as I feel like their meals are often all the same--rather bland, greasy, overly cheese concoctions of the same stuff over and over. I think the trick is ordering the specialities or more unusual items to really get the best flavors the restaurants can offer.
Posted by Nicole at 1/24/2011 08:30:00 PM